This year I was honored to be invited to participate in the Canaveral Seashore Plein Air Paint Out.

The paint-out was to be a whole week (October 1st thru the 8th) of 26 artists painting events in and around Canaveral National Seashore and New Smyrna Beach.

I arrived on Sunday morning with the news that a hurricane was forecast to pass far offshore Florida’s east coast. No big deal, maybe some winds, so the weatherman said! My first stop was the National seashore for a tour of the park given by one of the park rangers. He took us to see the park’s iconic Eldora house and Turtle Mound. As we toured, the mosquitos literally feasted on our arms and ankles and the storm clouds brewed over the ocean. It didn’t look pretty!  But the rain held off while we had our artist orientation and dinner that evening. 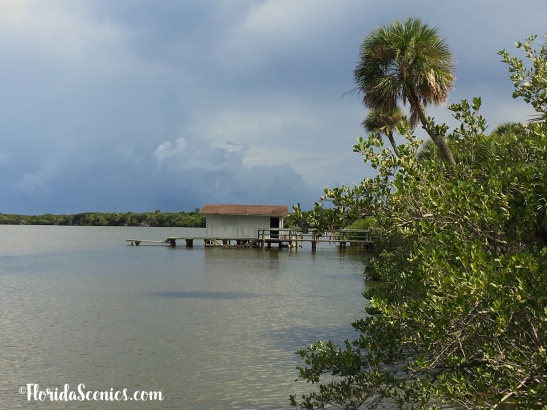 Cute little boathouse. I saw this on the first day and planned to create a painting of it. But I didn’t have time to get to it. Unfortunately it was destroyed by Hurricane Matthew.

The next morning I was awoken at about 3am by thunder and a train. At least I hoped it was a train – not a tornado! The rain was crashing loudly on the tin roof of my little beach cottage. By dawn it was still dark and rainy. Many of the artists took cover to paint under a pavilion on the bay. I drove down to a little kayak launch and used my open car hatch as a roof to paint under. The painting turned out gray dark and dreary – so I didn’t even turn it in.

By noon the sun came out, and so did word that the storm was now forecast to move closer to the coastline. But still not too close, so we kept painting! I painted a cute little mangrove tree along a shell lined beach on the bayside. While I painted about a half dozen manatees rolled along the shore, a few dolphin swam by, and some fish jumped around too. It was a beautiful place.

Later that evening all of the artists gathered in downtown to paint a night scene. I chose this cute little shop called The Palms. The cool breeze kept the mosquitos away and we all had a fun time. 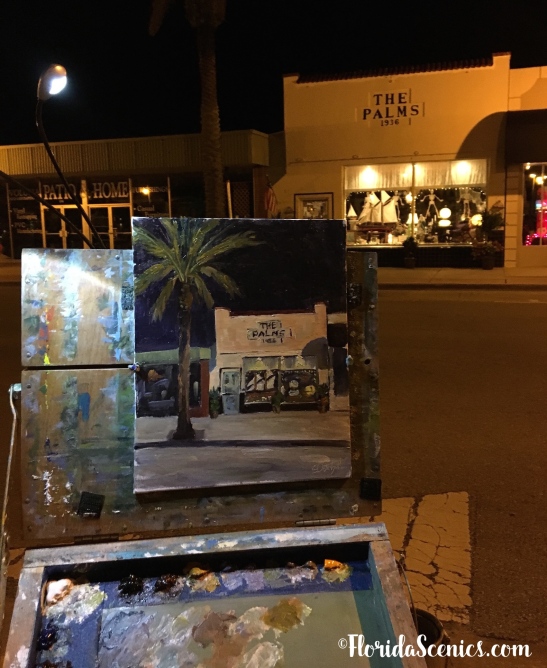 Nocturne at The Palms

By the time Tuesday morning came the forecast was even worse – now Hurricane Matthew was a category 3 storm and the path was just 50 miles from the coast. A bit too close for comfort! But the show must go on and we kept painting! I got out early and painted the sunrise of the palm trees on Chicken Island. Then I cruised over to the beach and set up my acrylics easel to create some little beach paintings. The surf was very rough and the clouds and drizzle kept rolling in and out.

Acrylics on the beach

After painting the beach, the sun was out again, so I went back to the bayside and painted some palms near a kayak launch. By this time I was exhausted and went back to my cottage to frame some paintings to turn in to the gallery.

Almost forgot to get a picture!

Wednesday morning Hurricane Matthew was forecast to be a Category 4 storm and to sideswipe all along the Florida east coast and evacuations were underway! I decided not to stay at the beach, but before I left I painted a beautiful sunrise on the beach. The sky was gorgeous, but the waves told another story.

The mean looking sky and crashing waves – Matthew’s on the way.

My last sunrise before the storm

The rest of the Paint Out was canceled due to the storm. New Smyrna was forecast to get a 5′ storm surge, but luckily that didn’t happen. (Unfortunately St. Augustine got the storm surge and thousands of buildings were damaged). The building housing our paintings did suffer roof and water damage though, and a new venue is being sought for the big Art Auction and Gala to be rescheduled in November. Check out my Facebook page for posting of the new Gala dates.

It was a sad ending to the Canaveral Seashore Plein Air Paint Out. But we’ll be back for the Gala!

I wish we had more days to paint. New Smyrna Beach and the Canaveral National Seashore offer many scenic and historic places to see. I’ll be going back and painting some of the scenes soon!

The cupboard was bare! I stopped for supplies on the way home, but I got there a bit too late.