If you are traveling to Gasparilla Island State Park, you have no choice but to drive through downtown Boca Grande. Usually we avoid traveling through towns. Who needs to deal with the traffic and stoplights, right?

Well, Boca Grande is not like any other town in Florida. It has maintained it’s small-town historic ambiance amid the luxurious beachfront homes that populate the island. You won’t see a McDonalds here, nor any stoplights! Forget high rise condos too. Unfortunately this idyllic little beach town isn’t exactly a cheap place to stay. But if you go during the slow season like we did, you’ll get a lower rate and have the town practically to yourself!

But first, to get here you’ll need to cross over the drawbridge. It seems to be up most of the time, but thats OK! Stop and enjoy the view of the boats and birds as they go by. Once over the bridge the two lane road travels alongside an abandoned railroad. The railroad was what made this town, but it has been gone for a couple of decades. Now the tracks are gone and replace by a bike path and fishing pier. We stopped at the pier and Rick caught several small grouper in just a few minutes time. While he fished, I took photos of the many birds that fished along the rocks below.

The downtown seems to be anchored by the old railroad depot and the historic Gasparilla Inn and Lodge. Both are authentic wood frame buildings and restored to beautiful condition. There are also a few old shops in town too.

Nearby is the historic Whidden’s Marina. This place is a real gem – at least for those who love old Florida – all faded and rusty! Since the 1920’s this has been the place to go for fishing guides headed out to try their luck at landing a huge tarpon.

A bit further down the road are the 2 lighthouses of the island., Both a part of Gasparilla Island State Park. First is the Range Light. This rusty relic from the early 1900’s stands tall over the beautiful white sand beach. Not far away is the Port Boca Grande Lighthouse and keepers house. These two buildings sit at the tip of the island where the old railroad came to an end. In the old days, this was a busy port and the lighthouse was necessary to help the boats into port to load the phosphate that the trains brought in. The port and the phosphate train is gone, but these buildings still keep watch over this beautiful island.

View from the Drawbridge

The tracks are now home to the city pier. 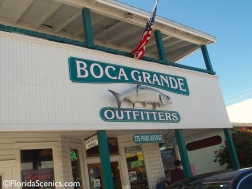 SUP – stand up paddle board rentals 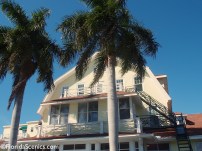 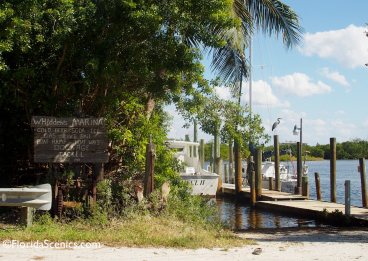 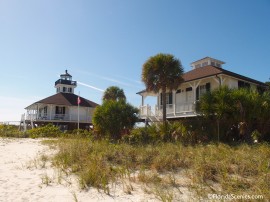 Sunrise over the mangroves

2 comments on “Side Trip – Boca Grande”